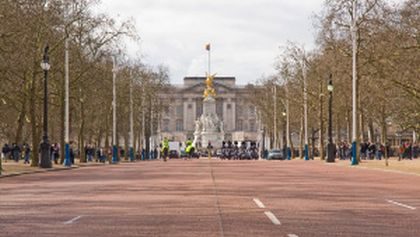 LONDON, ENGLAND – MARCH 2013 Buckingham Palace viewed from the centre of the Mall with traffic in London, England. 26 seconds.

More about The Mall

The Mall is a road in the City of Westminster, London running from Buckingham Palace at its western end to Admiralty Arch and on to Trafalgar Square at its eastern end. Before its termination at Whitehall it is met by Spring Gardens, which was where the Metropolitan Board of Works and, for a number of years, the London County Council were based. It is closed to traffic on Sundays and public holidays, and on ceremonial occasions.

The Mall began as a field for playing pall-mall. In the 17th and 18th centuries it was a fashionable promenade, bordered by trees.

The Mall was envisioned as a ceremonial route in the early 20th century, matching the creation of similar ceremonial routes in other cities such as Berlin, Mexico City, Oslo, Paris, Saint Petersburg, Vienna and Washington, D.C. These routes were intended to be used for major national ceremonies. As part of the development – designed by Aston Webb – a new façade was constructed for Buckingham Palace, and the Victoria Memorial was erected.

The Queen Victoria Memorial is immediately before the gates of the Palace, whilst Admiralty Arch at the far end leads into Trafalgar Square. The length of The Mall from where it joins Constitution Hill at the Victoria Memorial end to Admiralty Arch is exactly 0.5 nautical miles (0.93 km; 0.58 mi). St. James’s Park is on the south side of The Mall, opposite Green Park and St James’s Palace, on the north side. Running off The Mall at its eastern end is Horse Guards Parade, where the Trooping the Colour ceremony is held.

The surface of The Mall is coloured red to give the effect of a giant red carpet leading up to Buckingham Palace. This colour was obtained using synthetic iron oxide pigment from Deanshanger Oxide Works (Deanox), which was created using the Deanox Process devised by chemist Ernest Lovell. It was David Eccles’ decision, as Minister of Works from 1951 to 1954, to make The Mall red.

On VE Day – 8 May 1945 – the Palace was the centre of British celebrations, with the King, Queen and Princess Elizabeth (the future queen) and Princess Margaret appearing on the balcony, with the Palace’s blacked-out windows behind them, to the cheers from a vast crowd on The Mall.

During state visits, the monarch and the visiting head of state are escorted in a state carriage up The Mall and the street is decorated with Union Flags and the flags of the visiting head of state’s country. During the Golden Jubilee celebrations of Queen Elizabeth II in 2002, over one million people packed The Mall to watch the public displays and the appearance of the Royal Family on the palace balcony. These scenes were repeated in 2011 for the wedding of Prince William and Catherine Middleton, and again in 2012 for the Queen’s Diamond Jubilee, and the Jubilee concert.

Buckingham Palace is the London residence and principal workplace of the reigning monarch of the United Kingdom. Located in the City of Westminster, the palace is often at the centre of state occasions and royal hospitality. It has been a focus for the British people at times of national rejoicing. Originally known as Buckingham House, the building which forms the core of today’s palace was a large townhouse built for the Duke of Buckingham in 1703 on a site which had been in private ownership for at least 150 years. It was subsequently acquired by King George III in 1761 as a private residence for Queen Charlotte and was known as “The Queen’s House”. During the 19th century it was enlarged, principally by architects John Nash and Edward Blore, who formed three wings around a central courtyard. Buckingham Palace finally became the official royal palace of the British monarch on the accession of Queen Victoria in 1837. The last major structural additions were made in the late 19th and early 20th centuries, including the East front, which contains the well-known balcony on which the royal family traditionally congregates to greet crowds outside. However, the palace chapel was destroyed by a German bomb during World War II; the Queen’s Gallery was built on the site and opened to the public in 1962 to exhibit works of art from the Royal Collection.

The original early 19th-century interior designs, many of which still survive, included widespread use of brightly coloured scagliola and blue and pink lapis, on the advice of Sir Charles Long. King Edward VII oversaw a partial redecoration in a Belle Époque cream and gold colour scheme. Many smaller reception rooms are furnished in the Chinese regency style with furniture and fittings brought from the Royal Pavilion at Brighton and from Carlton House. The Buckingham Palace Garden is the largest private garden in London.

The state rooms, used for official and state entertaining, are open to the public each year for most of August and September, as part of the Palace’s Summer Opening.

Every year some 50,000 invited guests are entertained at garden parties, receptions, audiences and banquets. The Garden Parties, usually three, are held in the summer, usually in July. The Forecourt of Buckingham Palace is used for Changing of the Guard, a major ceremony and tourist attraction (daily during the summer months; every other day during the winter).

The palace, like Windsor Castle, is owned by the British state. It is not the monarch’s personal property, unlike Sandringham House and Balmoral Castle. Many of the contents from Buckingham Palace, Windsor Castle, Kensington Palace and St. James’s Palace are known collectively as the Royal Collection; owned by the Sovereign, they can, on occasions, be viewed by the public at the Queen’s Gallery, near the Royal Mews. Unlike the palace and the castle, the gallery is open continually and displays a changing selection of items from the collection. The rooms containing the Queen’s Gallery are on the site of the former chapel, which was damaged by one of the seven bombs to fall on the palace during World War II. The palace’s state rooms have been open to the public during August and September since 1993. The money raised in entry fees was originally put towards the rebuilding of Windsor Castle following the 1992 fire which destroyed many of its state rooms.

In May 2009, in response to a request from the Queen to the government for money to carry out a backlog of repairs to the palace, a group of MPs on the Public Accounts Committee proposed that in return for the extra £4 million in annual funds requested, the palace be open to the public more than the 60 days it is now, as well as when members of the royal family are in residence.

Thus, Buckingham Palace is a symbol and home of the British monarchy, an art gallery and tourist attraction. Behind the gilded railings and gates which were completed by the Bromsgrove Guild in 1911 and Webb’s famous façade, which has been described in a book published by the Royal Collection as looking “like everybody’s idea of a palace”; is not only the weekday home of the Queen and Prince Philip but also the London residence of the Duke of York and the Earl and Countess of Wessex. The palace also houses the offices of the Queen, Prince Philip, Duke of York, Earl and Countess of Wessex, Princess Royal, and Princess Alexandra, and is the workplace of 800 people.