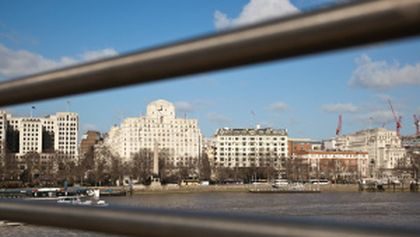 Buildings beside Thames vertical track. Timelapse track of large building (Shell Mex) on north bank of the Thames in London with a clock. Shot through the hand rails using a vertical track. 20 seconds

Shell Mex House is a grade II listed building situated at number 80, Strand, London, UK. The current building was built in 1930-31 on the site of the Hotel Cecil and stands behind the original facade of the Hotel and between the Adelphi and the Savoy Hotel. Broadly Art Deco in style, it was designed by Ernest Joseph of the architectural firm of Messrs Joseph.

Standing 58 m (190 ft) tall, with 537,000 sq ft (49,900 m2) of floor space, Shell Mex House has 12 floors (plus basement and sub-basement) and is immediately recognizable from the River Thames and the South Bank by the clock tower positioned on the south side of the building (flanked by two large, hieratic figures at the south corners). The clock, which was known for a time as “Big Benzene”, is the biggest in London. It has faces looking towards the river and towards the Strand. It was described by architectural historian Nikolaus Pevsner as “thoroughly unsubtle, but…hold[s] its own in London’s river front.”

The building was for many years the London headquarters of Shell-Mex and BP Ltd for which it was originally built. Shell-Mex and BP Ltd was a joint venture company created by Shell and British Petroleum in 1932 when they decided to merge their United Kingdom marketing operations. Upon the brand separation of Shell-Mex and BP Ltd in 1975, Shell Mex House became the head office of Shell UK Ltd, which was Shell’s UK operating company. Changes in the way that Shell was run in the 1990s led to the disposal of the property by Shell. Today, simply known as 80 Strand, most of its floors are occupied by companies belonging to Pearson PLC, which use it as their registered office, including Pearson Learning Technologies, Penguin Books, Dorling Kindersley, Michael Joseph, Rough Guides and Pearson Global English.

Other notable businesses in this building are Aimia (formerly Groupe Aeroplan), which manages the Nectar loyalty card, and PricewaterhouseCoopers. PwC have temporarily accommodated some teams on the fifth floor whilst their offices at Embankment Place in Villiers Street are being refurbished.

The entrance of the building, which is set back from the Strand, is through a large gated archway. A green plaque was affixed to the wall just inside the gate in March 2008, proclaiming: The Royal Air Force was formed and had its first headquarters here in the former Hotel Cecil 1 April 1918. Below it is a brass plate stating: “This plaque was unveiled by the Chief of the Air Staff Air Chief Marshal Sir Glenn Torpy KCB CBE DSO ADC to mark the 90th anniversary of the formation of the Royal Air Force”.

During the Second World War, the building became home to the Ministry of Supply which co-ordinated supply of equipment to the national armed forces. It was also the home of the “Petroleum Board” which handled the distribution and rationing of petroleum products during the war. It was badly damaged by a bomb in 1940. The building reverted to Shell-Mex and BP Ltd on 1 July 1948 with a number of floors remaining occupied by the Ministry of Aviation (latterly the Board of Trade, Civil Aviation Division) until the mid-1970s. During this time, until the department’s move to the present location in Farnborough, the building was also the headquarters for the Air Accidents Investigation Branch – AAIB.

On 17 May 2006, The Times reported[4] that the building was for sale and that the Indian-Kenyan Kandhari family were the front-runners in the battle to buy it from the present owners, Vincent and Robert Tchenguiz. They were said to have offered £530 million for the building, but were competing with other interested groups, including Menorah, the Israeli insurer, an Irish company, and several British companies. An offer believed to be £520 million ($1.02 billion) was made in December 2006 by Istithmar, the investment agency of the Dubai government, which withdrew their offer before completion. The property was subsequently sold in July 2007 to a fund managed by Westbrook Partners.