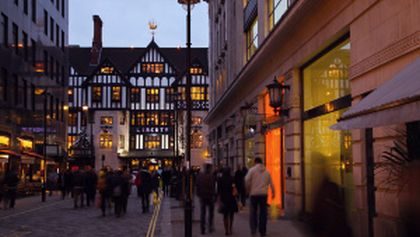 Liberty storefront with Christmas shoppers filmed with a timelapse track as sunset occurs – EDITORIAL USE ONLY. 23 seconds

Liberty is a department store on Regent Street, based in the West End shopping district of Central London. The department store sells a wide range of luxury goods including women’s, men’s and children’s fashion, cosmetics and fragrances, jewellery, accessories, homeware, furniture, stationery and gifts. Liberty is known for its floral and graphic prints.

Liberty’s third and fourth floors showcase innovative designs from famous gifting and homeware brands. The third floor’s central atrium is home to the Liberty Haberdashery department and is dedicated to the Liberty Art Fabrics collection, which introduces new designs and reused updated prints each season.

Arthur Lasenby Liberty was born in Chesham, Buckinghamshire in 1843. He was employed by Messrs Farmer and Rogers in Regent Street in 1862, the year of the International Exhibition at Kensington in London. By 1874, inspired by his 10 years of service, Arthur decided to start a business of his own, which he did the next year.

With a £2,000 loan from his future father-in-law, Arthur Liberty accepted the lease of half a shop at 218a Regent Street with only three staff members.

The shop opened during 1875 selling ornaments, fabric and objets d’art from Japan and the East. Within eighteen months Arthur Liberty had repaid the loan and acquired the second half of 218 Regent Street. As the business grew, neighbouring properties were bought and added.

In 1885, 142–144 Regent Street was acquired and housed the ever-increasing demand for carpets and furniture. The basement was named the Eastern Bazaar, and was the vending place for what was described as “decorative furnishing objects”. He named the property Chesham House after the place in which he grew up. The store became the most fashionable place to shop in London and Liberty fabrics were used for both clothing and furnishings. Some of its clientele was exotic, and included famous Pre-Raphaelite artists.

In 1884 Liberty introduced the costume department into the Regent Street store, directed by Edward William Godwin (1833–86). Godwin was a distinguished architect. He was a founding member of the Costume Society in 1882. He and Arthur Liberty created in-house apparel to challenge the fashions of Paris.

In November 1885, Liberty brought forty-two villagers from India to stage a living village of Indian artisans. Liberty’s specialized in Oriental goods, in particular imported Indian silks, and the aim of the display was to generate both publicity and sales for the store. However, it was a disaster commercially and publicly, with concern about the way the villagers were put on display.

During the 1890s Arthur Lasenby Liberty built strong relationships with many English designers. Many of these designers, including Archibald Knox, practised the artistic styles known as Arts and Crafts and Art Nouveau, and Liberty helped develop Art Nouveau through his encouragement of such designers. The company became associated with this new style, to the extent that in Italy, Art Nouveau became known as the Stile Liberty, after the London shop.

The store became one of the most prestigious in London.