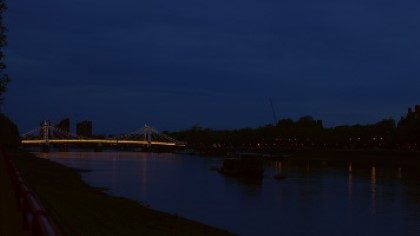 Albert Bridge sunset wide shot from Battersea Park. The Albert Bridge crosses over the River Thames near Chelsea, London, England. This version is a wide shot zooming into a close up of the bridge with the lights illuminated on a cloudy evening in May and the north bank of the Thames by Chelsea. 24 seconds

The Albert Bridge is a road bridge over the River Thames in West London, connecting Chelsea on the north bank to Battersea on the south bank. Designed and built by Rowland Mason Ordish in 1873 as an Ordish–Lefeuvre system modified cable-stayed bridge, it proved to be structurally unsound, so between 1884 and 1887 Sir Joseph Bazalgette incorporated some of the design elements of a suspension bridge. In 1973 the Greater London Council added two concrete piers, which transformed the central span into a simple beam bridge. As a result, today the bridge is an unusual hybrid of three different design styles. It is an English Heritage Grade II* listed building.

Built as a toll bridge, it was commercially unsuccessful. Six years after its opening it was taken into public ownership and the tolls were lifted. The tollbooths remained in place and are the only surviving examples of bridge tollbooths in London. Nicknamed “The Trembling Lady” because of its tendency to vibrate when large numbers of people walked over it, the bridge has signs at its entrances that warned troops to break step whilst crossing the bridge.

Incorporating a roadway only 27 feet (8.2 m) wide, and with serious structural weaknesses, the bridge was ill-equipped to cope with the advent of the motor vehicle during the 20th century. Despite the many calls for its demolition or pedestrianisation, the Albert Bridge has remained open to vehicles throughout its existence, other than for brief spells during repairs, and is one of only two Thames road bridges in central London never to have been replaced. The strengthening work carried out by Bazalgette and the Greater London Council did not prevent further deterioration of the bridge’s structure. A series of increasingly strict traffic control measures have been introduced to limit its use and thus prolong its life, making it the least busy Thames road bridge in London, except for the little-used Southwark Bridge. The bridge’s condition is continuing to degrade as the result of traffic load and severe rotting of the timber deck structure caused by the urine of the many dogs using it as a route to nearby Battersea Park.

In 1992, the Albert Bridge was rewired and painted in an unusual colour scheme designed to make it more conspicuous in poor visibility, and avoid being damaged by ships. At night it is illuminated by 4,000 bulbs, making it one of West London’s most striking landmarks. In 2010–2011, these were replaced with LEDs.