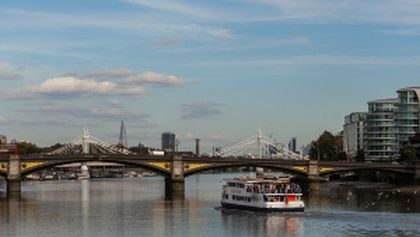 Battersea Bridge is a five-span arch bridge with cast-iron girders and granite piers crossing the River Thames in London, England. It is situated on a sharp bend in the river, and links Battersea south of the river with Chelsea to the north. The bridge replaced a ferry service that had operated near the site since at least the middle of the 16th century.

The first Battersea Bridge was a toll bridge commissioned by John, Earl Spencer, who had recently acquired the rights to operate the ferry. Although a stone bridge was planned, difficulties in raising investment meant that a cheaper wooden bridge was built instead. Designed by Henry Holland, it was initially opened to pedestrians in November 1771, and to vehicle traffic in 1772. The bridge was poorly designed and dangerous both to its users and to passing shipping, and boats often collided with it. To reduce the dangers to shipping, two piers were removed and the sections of the bridge above them were strengthened with iron girders.

Although dangerous and unpopular, the bridge was the last surviving wooden bridge on the Thames in London, and was the subject of paintings by many significant artists such as J. M. W. Turner, John Sell Cotman and James McNeill Whistler, including Whistler’s Nocturne: Blue and Gold – Old Battersea Bridge, and his controversial Nocturne in Black and Gold – The Falling Rocket.

In 1879 the bridge was taken into public ownership, and in 1885 demolished and replaced with the existing bridge, designed by Sir Joseph Bazalgette and built by John Mowlem & Co. The narrowest surviving road bridge over the Thames in London, it is one of London’s least busy Thames bridges. The location on a bend in the river makes the bridge a hazard to shipping, and it has been closed many times due to collisions.