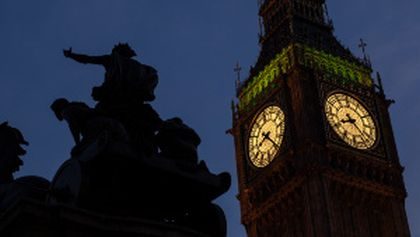 Big Ben and Boadicea Statue at sunset with zoom. Timelapse at sunset of the Big Ben clock on the Houses of Parliament and the statue of Boadicea (Boudica) built in 1905. Camera moves in to the clock face 16 seconds

More about the statue of Boudica –

A statue of Boudica with her daughters in her war chariot (ahistorically furnished with scythes after the Persian fashion) was executed by Thomas Thornycroft over the 1850s and 1860s with the encouragement of Prince Albert, who lent his horses for the model. Thornycroft exhibited the head separately in 1864. It was cast in bronze in 1902, 17 years after Thornycroft’s death, by his son Sir John, who presented it to the London County Council. They erected it on a plinth on the Victoria Embankment next to Westminster Bridge and the Houses of Parliament, inscribed with the following lines from Cowper’s poem:

Thy posterity shall sway.

Ironically, the great anti-imperialist rebel was now identified with the head of the British Empire, and her statue stood guard over the city she razed to the ground.

More about the Elizabeth Tower –

The Elizabeth Tower (previously called the Clock Tower), named in tribute to Queen Elizabeth II in her Diamond Jubilee year, more popularly known as Big Ben, was raised as a part of Charles Barry’s design for a new palace, after the old Palace of Westminster was largely destroyed by fire on the night of 16 October 1834. The new Parliament was built in a Neo-gothic style. Although Barry was the chief architect of the Palace, he turned to Augustus Pugin for the design of the clock tower, which resembles earlier Pugin designs, including one for Scarisbrick Hall. The design for the tower was Pugin’s last design before his final descent into madness and death, and Pugin himself wrote, at the time of Barry’s last visit to him to collect the drawings: “I never worked so hard in my life for Mr Barry for tomorrow I render all the designs for finishing his bell tower & it is beautiful.” The tower is designed in Pugin’s celebrated Gothic Revival style, and is 315 feet (96.0 m) high.

On 2 June 2012, The Daily Telegraph reported that 331 Members of Parliament, including senior members of all three main parties, supported a proposal to change the name from Clock Tower to “Elizabeth Tower” in tribute to the Queen in her Diamond Jubilee year. This is thought to be appropriate because the large west tower now known as Victoria Tower was renamed in tribute to Queen Victoria on her Diamond Jubilee. On 26 June, the House of Commons confirmed that the name change could go ahead. The Prime Minister, David Cameron, announced the change of name on 12 September 2012, at the start of Prime minister’s questions. The change was marked by a naming ceremony in which the Speaker of the House of Commons, John Bercow, unveiled a name plaque attached to the tower on Speaker’s Green.