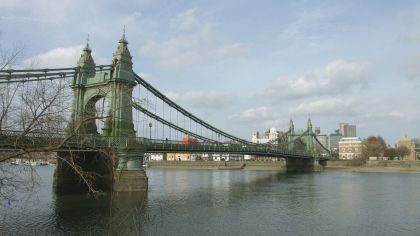 Time lapse of Hammersmith Bridge in London filmed from the south bank of the River Thames in March 2014 before it was closed to traffic for major structural repairs. 12 seconds

Hammersmith Bridge is a suspension bridge that crosses the River Thames in west London. It allows road traffic and pedestrians to cross from the southern part of Hammersmith in the London Borough of Hammersmith and Fulham, on the north side of the river, to Barnes in the London Borough of Richmond upon Thames, on the south side of the river. The current bridge, which is Grade II listed and was designed by the noted civil engineer Sir Joseph Bazalgette, is the second permanent bridge on the site.

The construction of a bridge was first sanctioned by an Act of Parliament in 1824 and work on site began the following year. It was the first suspension bridge over the River Thames and was designed by William Tierney Clark.

The bridge had a clear water-way of 688 feet 8 inches (209.91 m). Its suspension towers were 48 feet (15 m) above the level of the roadway, where they were 22 feet (6.7 m) thick. The roadway was slightly curved upwards, 16 feet (4.9 m) above high water, and the extreme length from the back of the piers on shore was 822 feet 8 inches (250.75 m), supporting 688 feet (210 m) of roadway. There were eight chains, composed of wrought-iron bars, each five inches deep and one thick. Four of these had six bars in each chain; and four had only three, making thirty-six bars, which form a dip in the centre of about 29 feet (8.8 m). From these, vertical rods were suspended, which supported the roadway, formed of strong timbers covered with granite. The width of the carriageway was 20 feet (6.1 m), with two footways of 5 feet (1.5 m). The chains passed over the suspension towers, and were secured to the piers on each shore. The suspension towers were of stone, and designed as archways of the Tuscan order. The approaches were provided with octagonal lodges, or toll-houses, with appropriate lamps and parapet walls, terminating with stone pillars, surmounted with ornamental caps. Construction of the bridge cost some £80,000. It was operated as a toll bridge.

By the 1870s, the bridge was no longer strong enough to support the weight of heavy traffic and the owners were alarmed in 1870 when 11,000 to 12,000 people crowded onto the bridge to watch the University Boat Race, which passes underneath just before the halfway point of its 4¼-mile (6.8 km) course. In 1884 a temporary bridge was put up to allow a more limited cross-river traffic while a replacement was constructed.

The current Hammersmith Bridge was designed by Sir Joseph Bazalgette and rests on the same pier foundations constructed for Tierney Clark’s original structure. The new bridge was built by Dixon, Appleby & Thorne and was opened by the Prince of Wales on 11 June 1887. With much of the supporting structure built of wrought iron, it is 700 feet (210 m) long and 43 feet (13 m) wide and cost £82,117 to build.