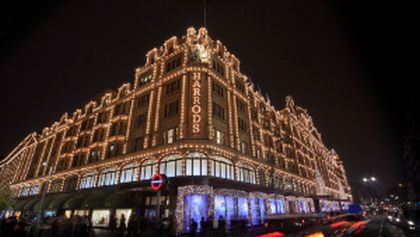 Harrods Store in Knightsbridge is lit up before Christmas. 14 seconds

More about Harrods
Harrods founder Charles Henry Harrod first established his business in 1834, aged 25. The business was located south of the River Thames in Southwark. The premises were located at 228 Borough High Street. He ran this business, variously listed as a draper, mercer and a haberdasher, certainly until 1831. During 1825 the business was listed as ‘Harrod and Wicking, Linen Drapers, Retail’, but this partnership was dissolved at the end of that year. His first grocery business appears to be as ‘Harrod & Co.Grocers’ at 163 Upper Whitecross Street, Clerkenwell, E.C.1., in 1832. In 1834 in London’s East End, he established a wholesale grocery in Stepney, at 4, Cable Street, with a special interest in tea. In 1849, to escape the vice of the inner city and to capitalise on trade to the Great Exhibition of 1851 in nearby Hyde Park, Harrod took over a small shop in the district of Brompton, on the site of the current store. Beginning in a single room employing two assistants and a messenger boy, Harrod’s son Charles Digby Harrod built the business into a thriving retail operation selling medicines, perfumes, stationery, fruits and vegetables. Harrods rapidly expanded, acquired the adjoining buildings, and employed one hundred people by 1880.

However, the store’s booming fortunes were reversed in early December 1883, when it burnt to the ground. Remarkably, in view of this calamity, Charles Harrod fulfilled all of his commitments to his customers to make Christmas deliveries that year—and made a record profit in the process. In short order, a new building was built on the same site, and soon Harrods extended credit for the first time to its best customers, among them Oscar Wilde, Lillie Langtry, Ellen Terry, Charlie Chaplin, Noël Coward, Gertrude Lawrence, Laurence Olivier and Vivien Leigh, Sigmund Freud, A. A. Milne, and many members of the British Royal Family.

On Wednesday, 16 November 1898, Harrods debuted England’s first “moving staircase” (escalator) in their Brompton Road stores; the device was actually a woven leather conveyor belt-like unit with a mahogany and “silver plate-glass” balustrade.[8] Nervous customers were offered brandy at the top to revive them after their ‘ordeal’.

The department store was purchased by the Fayed brothers in 1985.

Following denial that it was for sale, Harrods was sold to Qatar Holdings, the sovereign wealth fund of the State of Qatar in May 2010. A fortnight previously, chairman of Harrods since 1985, Mohamed Al-Fayed, had stated that “People approach us from Kuwait, Saudi Arabia, Qatar. Fair enough. But I put two fingers up to them. It is not for sale. This is not Marks and Spencer or Sainsbury’s. It is a special place that gives people pleasure. There is only one Mecca.”

The sale was concluded in the early hours of 8 May, when Qatari Prime Minister Hamad bin Jassim bin Jaber Al Thani came to London to finalise the deal, saying that the acquisition of Harrods would add “much value” to the investment portfolio of Qatar Holdings while his deputy, Hussain Ali Al-Abdulla, called it a “landmark transaction”. A spokesman for Mohamed Al-Fayed said “in reaching the decision to retire, [Fayed] wished to ensure that the legacy and traditions that he has built up in Harrods would be continued.” Harrods was sold for £1.5 billion; half of the sale will be used to pay bank debts of £625 million.

Al-Fayed later revealed in an interview that he decided to sell Harrods following the difficulty in getting his dividend approved by the trustee of the Harrods pension fund. Al-Fayed said “I’m here every day, I can’t take my profit because I have to take a permission of those bloody idiots…I say is this right? Is this logic? Somebody like me? I run a business and I need to take the trustee’s permission to take my profit.” Al-Fayed was appointed honorary chairman of Harrods, a position he will hold for at least six months.