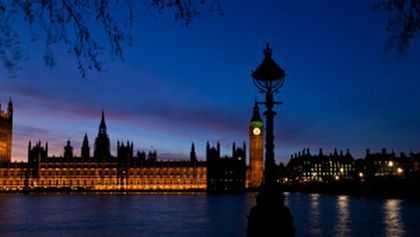 Time lapse of the houses of Parliament at sunset in January 2012. The camera tracks along the south embankment with a Victorian lamp in the foreground. Exposure adjusted as the sunlight fails and lights come on. 29 seconds. Closer version available in HD

The Houses of Parliament

The Palace of Westminster is the meeting place of the House of Commons and the House of Lords, the two houses of the Parliament of the United Kingdom. Commonly known as the Houses of Parliament after its occupants, the Palace lies on the northern bank of the River Thames in the City of Westminster, in central London. Its name, which derives from the neighbouring Westminster Abbey, may refer to either of two structures: the Old Palace, a medieval building complex that was destroyed by fire in 1834, and its replacement, the New Palace that stands today. For ceremonial purposes, the palace retains its original style and status as a royal residence and is the property of the Crown.

The subsequent competition for the reconstruction of the Palace was won by the architect Charles Barry, whose design was for new buildings in the Gothic Revival style, specifically inspired by the English Perpendicular Gothic style of the 14th-16th centuries. The remains of the Old Palace (with the exception of the detached Jewel Tower) were incorporated into its much larger replacement, which contains over 1,100 rooms organised symmetrically around two series of courtyards. Part of the New Palace’s area of 3.24 hectares (8 acres) was reclaimed from the Thames, which is the setting of its principal 266-metre (873 ft) façade, called the River Front. Barry was assisted by Augustus W. N. Pugin, a leading authority on Gothic architecture and style, who provided designs for the decorations and furnishings of the Palace. Construction started in 1840 and lasted for thirty years, suffering great delays and cost overruns, as well as the death of both leading architects; works for the interior decoration continued intermittently well into the twentieth century. Major conservation work has been carried out since, to reverse the effects of London’s air pollution, and extensive repairs took place after the Second World War, including the reconstruction of the Commons Chamber following its bombing in 1941.