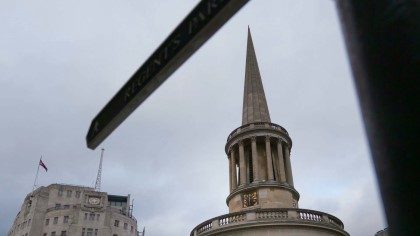 Time lapse of All Souls Church London and the BBC Broadcasting House in Regent Street London. The iconic Church was designed by John Nash and completed in 1823. The time lapse tracks behind a sign post for nearby Regents Park. 15 seconds

More about All Souls Church –

All Souls Church is an Anglican Evangelical church in central London, situated in Langham Place in Marylebone, at the north end of Regent Street. It was designed by John Nash and consecrated in 1824.

As it is very near BBC Broadcasting House, the BBC often broadcasts from the church. As well as the core church membership, many hundreds of visitors come to All Souls, bringing the average number of those coming through the doors for services on Sundays to around 2,500 every week. All Souls has an international congregation, with all ages represented.

The church was designed by John Nash, favourite architect of King George IV. Its prominent circular spired vestibule was designed to provide an eye-catching monument at the point where Regent Street, newly-laid out as part of Nash’s scheme to link Piccadilly with the new Regent’s Park, takes an awkward abrupt bend westward to align with the pre-existing Portland Place.

All Souls was a Commissioners’ church, a grant of £12,819 (£1,010,000 in 2015) being given by the Church Building Commission towards the cost of its construction. The commission had been set up under an act of 1818, and Nash, as one of the three architects employed by the Board of Works, had been asked to supply specimen designs as soon as the act was passed. It was, however, one of only two Commissioners’ churches to be built to his designs, the other being the Gothic Revival St Mary, Haggerston. All Souls is the last surviving church by John Nash.

The building was completed in December 1823 at a final cost of £18,323 10s 5d. and was consecrated the following year by the Bishop of London.

The church is built of Bath stone. It consists of a prominent spired circular vestibule, attached to a much more reticent main church by the width of a single inter-columniation. The idiosyncratic spire is composed of seventeen concave sides encircled by a peripteros of Corinthian columns, making two separate sections.