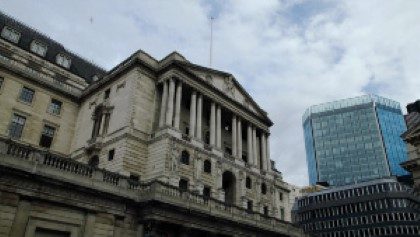 Known as The Old Lady of Threadneadle Street, the Bank of England is still the centre of finance in the UK. In this time-lapse dark clouds stream overhead in a metaphor of the economic climate. 15 seconds

More about the Bank of England

The Bank of England, formally the Governor and Company of the Bank of England, is the central bank of the United Kingdom and the model on which most modern central banks have been based. Established in 1694, it is the second oldest central bank in the world, after the Sveriges Riksbank, and the world’s 8th oldest bank. It was established to act as the English Government’s banker, and is still the banker for the Government of the United Kingdom. The Bank was privately owned by stockholders from its foundation in 1694 until nationalised in 1946.

In 1998, it became an independent public organisation, wholly owned by the Treasury Solicitor on behalf of the government, with independence in setting monetary policy.

The Bank’s Monetary Policy Committee has devolved responsibility for managing monetary policy. The Treasury has reserve powers to give orders to the committee “if they are required in the public interest and by extreme economic circumstances” but such orders must be endorsed by Parliament within 28 days. The Bank’s Financial Policy Committee held its first meeting in June 2011 as a macro prudential regulator to oversee regulation of the UK’s financial sector.

The Bank’s headquarters have been in London’s main financial district, the City of London, on Threadneedle Street, since 1734. It is sometimes known by the metonym The Old Lady of Threadneedle Street or The Old Lady, a name taken from the legend of Sarah Whitehead, whose ghost is said to haunt the Bank’s garden. The busy road junction outside is known as Bank junction.

Mark Carney assumed the post of The Governor of the Bank of England on 1 July 2013. He succeeded Mervyn King, who took over on 30 June 2003. Carney, a Canadian, will serve an initial five-year term rather than the typical eight, and will seek UK citizenship. He is the first non-British citizen to hold the post. As of January 2014, the Bank also has four Deputy Governors.