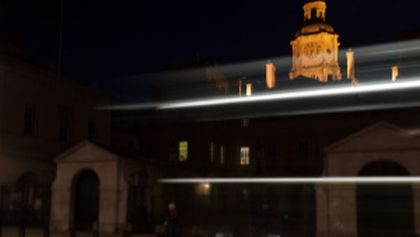 Time lapse of the Whitehall entrance of Horse Guards at night. Car headlights appear blurred due to the long exposure. The clock runs for 30 minutes. 21 seconds

Horse Guards is a large grade I listed building in the Palladian style between Whitehall and Horse Guards Parade in London. The first Horse Guards building was built on the site of the former tiltyard of Westminster Palace in 1664. It was demolished in 1749 and was replaced by the current building which was built between 1750 and 1753 by John Vardy after the death of original architect in 1748 William Kent. Horse Guards Road runs north-south on the western boundary of the parade ground, while Horse Guards Avenue runs east from Whitehall on other side of the building, to Victoria Embankment.

The building served as the offices of the Commander-in-Chief of the Forces until 1904 when the post was abolished and replaced by the Chief of the General Staff. The Chief of the General staff moved to the Old War Office Building in 1906 and Horse Guards subsequently became the headquarters of two major Army commands: the London District and the Household Cavalry. The building is the formal entrance to St James’s Palace via St. James’s Park (though this is now entirely symbolic). Only the monarch is allowed to drive through its central archway, or those given a pass (formerly made of ivory).